How epithelial cells ward off viruses

A team led by Veit Hornung has shown that a protein found in skin cells recognizes a specific nucleic acid intermediate that is formed during virus replication. This recognition process subsequently induces a potent inflammatory response. 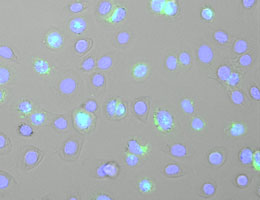 The ability to differentiate between self and potentially harmful non-self is vital for the integrity and survival of organisms. In most organisms, the so-called innate immune system is responsible for the recognition of such intruders. Among the proteins that perform this task is a class known as inflammasome sensors. Once activated, these sensors form inflammasome complexes, which then trigger a range of inflammatory responses that can in some cases lead to the death of the infected cell. A group of researchers led by LMU immunologist Veit Hornung, in cooperation with colleagues at the Technical University of Munich and the Max Planck Institute for Biochemistry, has now demonstrated that one such sensor found in skin cells binds directly to a specific molecular structure that arises during the replication of certain RNA viruses. The new findings, published in the leading journal Science, underline the importance of epithelial cells as a barrier against invasive pathogens.