A team led by Johannes Stigler, in cooperation with the group of Kurt Schmoller, identified the elbow as an essential folding guide in SMC coiled coil arms 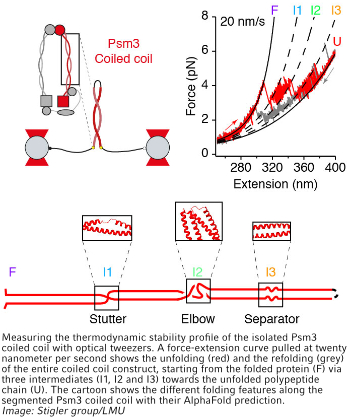 Structural maintenance of chromosome (SMC) complexes form ring-like structures through exceptional elongated coiled coils (CC). Recent studies found that variable CC conformations including open and collapsed forms, which might result from discontinuities in the CC, facilitate the diverse functions of SMCs in DNA organization. However, a detailed description of the SMC CC architecture is still missing. Here, Johannes Stigler and his team together with the group of Kurt Schmoller study the structural composition and mechanical properties of SMC proteins with optical tweezers unfolding experiments using the isolated Psm3 CC as a model system. They find a comparatively unstable protein with three unzipping intermediates, which they could directly assign to CC features by crosslinking experiments and state-of-the-art prediction software. Particularly, the CC elbow is shown to be a flexible, potentially non-structured feature, which divides the CC into sections, induces a pairing shift from one CC strand to the other and could facilitate large-scale conformational changes — most likely via thermal fluctuations of the flanking CC sections. A replacement of the elbow amino acids hinders folding of the consecutive CC region and leads frequently to non-native misalignments, revealing the elbow as a guide for proper folding. Additional in vivo manipulation of the elbow flexibility resulted in impaired cohesin complexes, which directly links the sensitive CC architecture to the biological function of cohesin.