An alternative route to inflammation 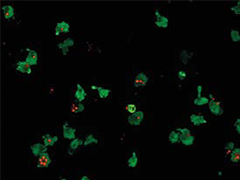 The immune system in vertebrates is capable of distinguishing “self” from “non-self” components, which enables recognition and destruction of invasive pathogens and aberrant cell types such as tumor cells. Adaptive immune reactions, e.g. based on antibodies, are powerful and highly specific, yet require tedious and time-consuming gene rearrangements. For effective immediate defense, intruders must be detected rapidly, and this task is performed by the so-called innate immune system. Innate immune cells express a relatively small set of receptors on their surfaces, which recognize molecular structures that are uniquely associated with pathogens. Binding of these structures triggers an inflammatory response that kills the pathogen or the infected cell. In order to analyze the signal pathways that mediate these processes, researchers led by Veit Hornung, who holds the Chair of Immunobiochemistry at LMU’s Gene Center, combined two different methodologies. They first utilized a novel cell culture system that mimics the function of monocytes, a class of immune cells involved in regulating inflammation. Then they systematically deleted single genes to determine their role in initiation of the inflammatory response – and uncovered a previously unknown signaling pathway. The findings appear in the journal “Immunity”.