Ribosomes are the organelles responsible for protein synthesis in cells. Roland Beckmann and his team have now dissected early steps in their assembly and visualized how their RNA components fold correctly and find their places in the growing structure. 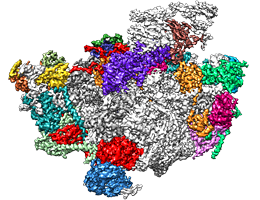 In actively growing cells, a huge variety of proteins must be synthesized in widely varying amounts. To meet these demands, the cell’s protein factories – the ribosomes – which are made up of proteins and several RNAs must themselves be built in considerable numbers. A growing yeast cell produces on the order of 100,000 ribosomes per hour, each of which consists around 80 ribosomal proteins and four ribosomal RNAs (rRNAs), distributed between two distinct subunits that functionally interact with each other. In addition, ribosomal assembly requires the intervention of approximately 200 other proteins that serve as biogenesis factors, which are not part of the final structure. These factors orchestrate the construction of the ribosome and direct the sequential folding of the rRNAs, which provides the appropriate binding sites for the insertion of the ribosomal proteins. LMU researchers led by Professor Roland Beckmann, in cooperation with Professor Ed Hurt’s group at Heidelberg University, have now determined, for the first time in three-dimensional detail, how the early steps in the assembly of the large subunit take place in yeast cells. The findings appear in the leading journal Cell.