Maturation of the ribosome is a complex operation. Work by a team of Gene Center researchers in cooperation with colleagues based in Heidelberg now shows that the 90S precursor of the small 40S subunit undergoes a ‘molting’ process, during which it progressively discards its outermost components.

Scheme of the 90S to pre-40S transition upon A1 cleavage. Cartoons depict the shedding-like transition from a 90S to a primordial pre-40S ribosome. The helicase Dhr1 is shown as a grabbing hand, representing the open and closed conformations. Image: Beckmann lab, LMU

Protein synthesis, programmed by the genetic information encoded in the DNA, is perhaps the most crucial process that takes place in biological cells. Proteins are indispensable for all organisms, because they are responsible for 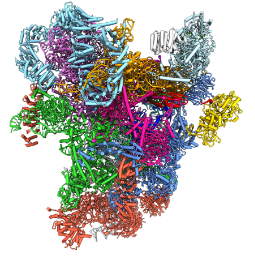 performing a vast range of biological functions. Indeed, the molecular machines that put proteins together – which are known as ribosomes – are themselves partly made up of specific proteins. The second vital ingredient of every ribosome is a small set of specific RNAs, which serve as scaffolds to which ribosomal proteins can be specifically attached. The synthesis of ribosomes is therefore an extremely complex, multistep process, which includes both assembly and maturation stages. This complexity explains why many of the details of the whole operation are still incompletely understood. Now a group of researchers led by Professor Roland Beckmann at LMU’s Gene Center has obtained new insights into the maturation phase that gives rise to the small subunit of the functional ribosome in brewer’s yeast. The study, which was carried out in collaboration with colleagues based in Heidelberg, appears in the leading journal Science.