Maturation of the ribosome is a complex operation. Work by a team of Roland Beckmann in cooperation with colleagues from ETH Zurich now reveals the last steps in 40S formation in human cells.

Ribosome biogenesis is coordinated by more than 200 trans-acting protein and RNA factors, and starts in the nucleolus with the transcription of a common RNA precursor. The small and large subunit precursors are subsequently separated and exported from the nucleus. Small subunit maturation ends in the cytosol, when the final rRNA precursor is cleaved by the endonuclease NOB1. Previous structures of human 40S precursors have shown that NOB1 is kept in an inactive state by its partner PNO1. The final maturation events remained unresolved. Now, cryo-electron microscopy structures obtained by a team of  Roland Beckmann at LMU’s Gene Center in cooperation with the group of Ulrike Kutay from ETH Zürich enable a detailed understanding of the last steps in 40S formation in human cells and, in addition, provide evidence for principal differences in small ribosomal subunit formation between humans and the model organism Saccharomyces cerevisiae. The study appears in the leading journal Nature. 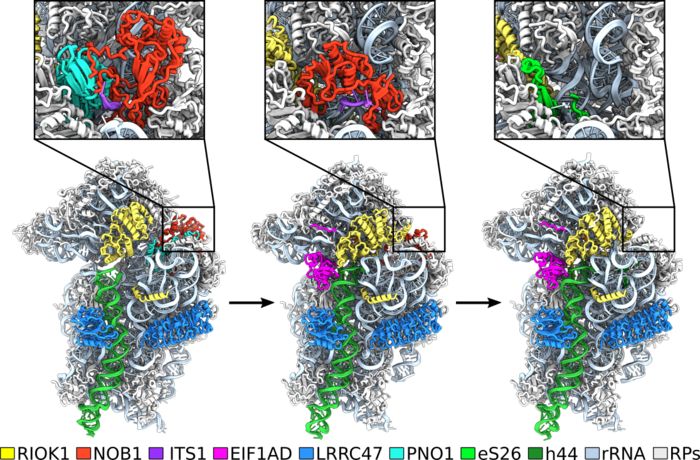