Researchers of the lab of Veit Hornung in collaboration with Thomas Carell (LMU Department Chemistry) report that a central component of the innate immune response is activated by two short RNAs which are produced by site-specific cleavage of a precursor RNA molecule – and both derivatives are generated by the same enzyme. 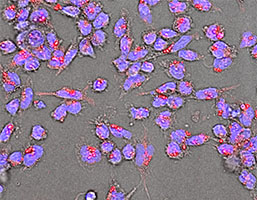 The innate immune system can be thought of as the frontline in the body‘s fight against invasive pathogens. Cells possess specialized receptors that can distinguish between RNAs derived from foreign cells – such as pathogenic bacteria and viruses – and ‘native’ RNAs. Recognition of the former then activates the appropriate immune response to eliminate the invaders. However, the molecular mechanisms that underlies this mode of detection has remained obscure. Now immunologist Professor Veit Hornung, in collaboration with LMU chemist Professor Thomas Carell, has discovered that the activation of one of these receptors, called TLR8, is mediated by the binding of two specific RNA fragments, generated by degradation of foreign RNA – and that both breakdown products are generated by a single enzyme called RNase T2. The new findings appear in the leading journal Cell.